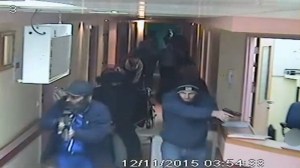 An undercover Israeli military unit has killed a 28-year-old Palestinian man while storming the al-Ahli hospital in the occupied West Bank city of Hebron.

An estimated 21 undercover officers – known as the Mustaarabin – shot dead Abdullah al-Shalaldeh before dawn on Thursday morning while raiding the hospital room of the victim’s cousin, Azzam, according to a statement by the Palestinian Authority Ministry of Health.

The Israeli commandos had come to question Azzam, who was in a surgery unit of the hospital awaiting an operation after being shot by an Israeli settler last month, when they shot dead Abdullah.

Azzam, who has been accused of stabbing an Israeli man, was subsequently arrested.

Dr Jihad Shawar, director of al-Ahli Hospital, told Al Jazeera the Israeli unit entered the facility at about 3am local time. Much of the raid was captured on CCTV cameras and posted online.

The undercover agents were disguised to blend in with the local Palestinian population, including one disguised as a pregnant woman.

“They headed straight towards the surgery ward, where Azzam al-Shalaldeh was being treated,” Shawar told Al Jazeera.

When Azzam’s cousin Abdullah came out of the bathroom, he was shot multiple times in the head and body.

“They kept the hospital’s medical crew as hostages at gun point. They arrested the patient and took him away, leaving his cousin [to] bleed to death,” Shawar added.

Speaking to Al Jazeera, Issa Amro, coordinator of the Hebron-based Youth Against Settlements activist group, said that “people are extremely angry because of what happened in the hospital”.

Hebron has been a focal point during the latest bout of violence between Israelis and Palestinians, with Israeli forces employing harsh measures.

“You don’t feel safe at home, in the street, in the hospital or in the mosque,” Amro said. “You are a target only because you’re a Palestinian.”

Shada Haddad, a 25-year-old resident of Hebron’s Tel Rumeida neighbourhood, said many people are scared to leave their homes.

“Any mother here wonders if her son will go out and not come back home,” she told Al Jazeera.

Amnesty International called for an investigation into the raid.

“The fact that Abdullah Shalaldeh was shot in the head and upper body suggests this was an extrajudicial execution,” said Philip Luther, the director of Amnesty International’s Middle East and North Africa programme.

Luther added that the killing came amid “a disturbing pattern of similar recent incidents by Israeli forces in the West Bank which warrant urgent investigation”.

Since October 1, Israeli troops or armed settlers have killed at least 81 Palestinians, including unarmed bystanders, protesters and suspected attackers. Ten Israelis have also been killed by Palestinians in stabbing or shooting incidents.

The latest unrest in Israel and the occupied Palestinian territories was triggered as Israeli incursions into the Al-Aqsa Mosque compound – the third holiest site for Muslims – have increased in frequency during recent months.

Although Jewish Israelis are formally banned from praying at the compound – which they also consider holy and call the Temple Mount – they are accompanied by security forces when they visit.

Many Palestinians fear that Israel will attempt to partition the Al-Aqsa Mosque Compound into separate areas of worship for Jews and Muslims.

The Israeli government says it trying to maintain the status quo at the compound, but several members of the Knesset have close ties to hardline right-wing groups and activists who advocate an Israeli takeover of the holy site.

The Mustaarabin, an undercover unit of Arabic-speaking fighters in the Israeli military, recently gained media attention when a video surfaced of them infiltrating a protest, beating people and pulling their weapons on Palestinian demonstrators before arresting several of them.